Last Saturday was marked by a show by the prog metal band Myrath from Tunisia (Northern Africa). The venue was the club Patronaat in Haarlem, Netherlands. Myrath is unique not only because of its origin, but also thanks to a magnificent combination of heavy sound and Arabic motives and instruments in their music. Furthermore, they have a belly dancer!

The support act was a Dutch band called Shadowrise, which draws one’s attention because of the outfit of their singer, Laura Guldemond:

These spikes look pretty dangerous, so you’d probably better be cautious in her vicinity in order to avoid injuries.

The other guitarist, Daniel Boomsma, and Yordi Florax on the bass:

The drummer is traditionally hiding backstage in smoke, his name is Joris Sevat:

It’s a young band who define their genre as Symphonic Power Metal. I’m not really into this kind of music, but I do appreciate the singer, as she makes the show worth watching. I stood right next to the stage, which was quite high, that’s why all the photos are shot from a somewhat peculiar point.

This one below, though, is pretty decent in my view:

I have filmed a couple of videos: the opening scene (in which the bassist played a note by mistake and that was funny), and one more. Unfortunately the sound on the video is quite bad, and you can mainly hear the bass and the drums there.

Some more photos of Shadowrise:

I’ve already been in Patronaat last summer to see Plini, Intervals, and Animals as Leaders (which I will blog about if I manage to find time for it), but they all performed in its big hall. This time the gig was played in the small one, only big enough for a hundred people or so. But I definitely prefer this type of venues because of their atmosphere, which is more friendly and intimate, so to say.

The band opened their performance with tracks from their last album Legacy. Here’s the video of their appearance and the songs Jasmin and Believer. You can also see the Portuguese dancer Kahina Spirit:

Back in the day the band itself played support acts for the biggies like Sypmhony X and Dream Theater. Now they’ve grown to be the headliners, and they well deserve it judging by their professinal performance and appearance.

On the show we’ve met an ex-colleague of mine with his girlfriend. She turned out to be a fashion designer that creates stagewear for bands, inluding Myrath, who they knew personally. They also told me that the band’s guitarist Malek Ben Arbia used to be shy, however I could hardly say that watching him. He looked (and played) jolly cool:

That’s him with the singer Zaher Zorgati:

The keyboardist Elyes Bouchoucha is the tallest band member:

He and the bass player Anis Jouini:

Here’s a video of another track from the new album called Storm of Lies:

The dancer Kahina Spirit didn’t appear in every song (so that the audience wouldn’t forget why they were there).

As I mentioned above, she comes from Portugal. On her DeviantArt page she says she started dancing at the age of three, and belly-dancing when she was fifteen. Now she’s 27.

As you look at her, you can’t help feeling surprised at the fluidity of the human body. For example, have a look at the following video is The Unburnt:

Once, when Zaher was singing Duat, he suddenly came down from the stage into the audience, and sat down on the ground. The spectators did the same:

I’ve made a short video of that episode.

Concluding my brief report, I must say that Myrath are very positive guys. One can feel their Arabic hospitality and friendliness. They’ve only released four albums to date, but I’m sure that if they put enough effort into making and recording new material, they will rocket in popularity. They decidedly have the potential.

Yet for now we can enjoy their performances in small clubs and very, VERY cheap tickets (€13 is ridiculously cheap for a touring band!).

Below are a few more photos from Myrath’s show.

All concert videos are available on the event page. ■ 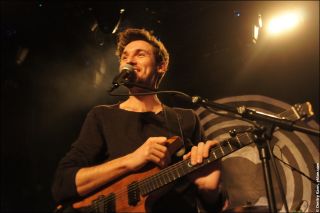