The last Queen’s Day to date happened three years ago, when Princess Beatrix, then still the Queen of the Netherlands, announced her upcoming abdication for her son Willem-Alexander. The latter celebrates his birthday on April 27th, which is very conveniently near the former date of April 30th.

King’s Day is a national holiday in the Netherlands. Therefore last Wednesday we light-heartedly set off for Amsterdam, traditionally dressed in orange. So did hordes of our fellow countrymen.

The entire city centre, starting from the Central Station, was packed with people who came to celebrate the birth of His Royal Highness.

It’s worth mentioning that the weather has been horrible the last couple of weeks. The night temperature was around zero degrees, whereas at daytime it hardly reached ten. Next to that, it was very windy and either raining or hailing every couple of hours. According to the weather record, it’s been the coolest April 27th in the last thirty-eight years. I wasn’t even sure there would be a proper celebration, but the time proved me wrong.

Of course, it wasn’t as crowded as back in the day since no-one really appreciated the weather. It wasn’t very orange either, with the reason being that orange coats are much less common among the Dutch then orange T-shirts. That said, it’s still been a great day, as it stayed dry and even sunny the most of it.

They crammed a small amusement park into the main square of the city, Dam. The attractions were at least twice as high as the surrounding buildings:

Improvised stages were set at random points in the down-town. Some were playing jazz:

And some dance music:

A good deal of music was coming from festive boats loaded with drunk orange people:

The most posh boats were the orange ones of course:

However not many ventured on hiring a boat in such weather, as you’d have hard time on it once it started raining. 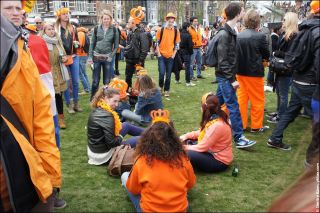 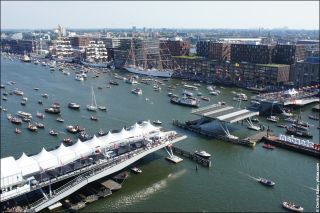