If you think I pay too much attention to Stream of Passion, I can tell you I’ve seen a man on the show for whom that show of the band was the 94th.

Moreover, with the ticket price of €14 it would be stupid not to go.

Just like two years ago the show was hosted by a small and cosy club in Utrecht called Tivoli de Helling. The concert featured an impressive list of guest singers:

Contrary to a popular belief Anneke and Dianne van Giersbergen are not related. And no, I don’t know why they happened to be on the same stage. Perhaps Marcela has a guest candidate list sorted alphabetically, or something like that.

The New Year’s eve excitement was in the air, both with the audience and the musicians. Marcela Bovio was giggling, making jokes and asking everyone what they had for Christmas dinner.

There was a funny moment when Johan, violently brandishing his guitar, caught and lifted Marcela’s skirt with the neck. She turned around, perplexed.

Rhythm guitarist Eric Hazebroek, again playing a funny headless guitar. With eight strings it was one more compared to the previous time.

Marcela Bovio and Dianne van Giersbergen are singing Abends Will Ich Schlafen Gehn from Hansel and Gretel to the accompaniment by Stephan Schultz. That is, supposed to sing, but Marcela is asking Stephan about the dinner instead:

As usual, Marcela also played a violin for a short while:

Drummer Martijn Peters is happy after the gig:

I’ve filmed the most remarkable items, as always.

The risible Marcela is having hard time trying to begin singing the serious Abends Will Ich Schlafen Gehn:

In Motion #1 by The Gathering could not be sung without Anneke van Giersbergen:

A very nice cover of Queen’s Show Must Go On, with Marcela and Merijn on vocals:

The Curse with Anneke van Giersbergen:

Some more photos of the show:

On the same subject, I’ve recently learned about setlist.fm, which is a wiki-like setlist service. For instance, here’s a setlist of the show in question.

In my humble opinion, these end-year shows by Stream of Passion have the best vibe of all. It’s also a nice opportunity to learn new great names. And, last but not least, they are not so crowded thanks to the holiday period, despite the ticket price being ridiculously low.

All gig videos are available at the event page. ■ 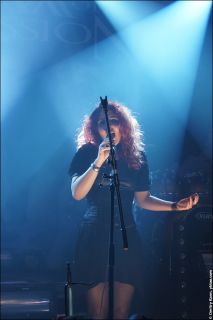 A Winter Evening with Stream of Passion 2013