Between the 19 and the 23 of August Amsterdam hosted a huge marine event called SAIL Amsterdam. It’s held once every five years, and is most known for its tall ships (apart from hundreds of other ships). During the event they sail in loops around the IJ lake, giving the area a totally different look and attracting millions (yes, millions) of visitors.

For these days bridges over the IJ are open or even get dismantled to let the tall ships sail in.

The website of SAIL claims it’s the largest free marine event in the world.

The organisational effort put into it is astonishing. The Dutch are highly diligent when it comes to mass events, which are more than frequent during the summer months in Amsterdam.

Here’s what has been done for this five day event. Impressive information points assembled in several places in the city, as well as big info displays:

Roads and bridges in the centre were closed for transport:

Vending machines with batteries and powerbanks placed at several spots:

Narrow bridges over canals on the man-made Java island were supplemented by temporary four-section bridges to cope with the stream of public:

They’ve even come up with specially designed litter-bins!

The main activity was around the IJ and the Java and KNSM islands located on it. Here’s the official map of the event:

The Amsterdam Central railway station is on the left-hand side. Once you step out of it, you immediately are in the thick of things.

The IJ is right beside it.

The boats go in an never-ending stream, hundreds of them. The speed is capped at six km/h for safety reasons.

There are lots of small motor boats, with people relaxing and sunbathing.

But there are also more peculiar ones, like this De Utrecht, a reconstruction of the original XVIII century ship (leaflet in PDF):

But the most interesting ones are of course the tall ships moored at the Oranjehaven.

A sailor on the bowsprit:

This ninth edition of the festival was record breaking in many aspects:

The sail-in featured ships from all over the world: the USA, Australia, India, Chile etc. And also four Russian ships. The Kruzenshtern (1926):

The Sedov (1921), originally the Magdalene Vinnen II. According to the Wikipedia, the largest training sailing ship in the world:

We missed the other two, the Mir (1987) and the Nadezhda (1912). By the way, there was an accident involving the Mir, when a man fell overboard during the sail-in. The details are unknown, but I hope it was not due to booze…

The enormous gray Zr. Ms. De Ruyter (2004) was also very impressive. The displacement of the giant ship is 6050 tonnes:

One can cross the IJ using a free ferry line. To accommodate the large amount of public, larger ferry-boats were used.

Yet, they were all packed.

The ferry route lies across the stream of vessels, so it takes courage to operate one.

The IJ’s north bank. People hang out and enjoy the sun.

Potato chips are a Dutch favourite:

Those who don’t own a boat can easily rent one, either with or without a skipper. It’s especially popular for parties.

Masts stick out behind every roof on the Java island:

And its streets are sometimes too busy to walk (not to mention to bike):

From my experience, the best view you get from a 55-metre tall Ferris wheel erected on the west-end of the island:

The IJ’s south bank and the tall ships at the Veemkade. You can see the two streams of boats running in the opposite directions:

The west tip of the Java:

The Dutch Europa (1911), and the Amsterdam Central station afar:

On the other side of the narrow strait is moored another navy ship, the patrol vessel Zr. Ms. Zeeland (2013):

Two sections were removed from the Jan Schaeferbrug bridge to allow the ships to enter. Since it’s not usable for traffic, it was turned into a restaurant area:

The famous I amsterdam letters, so beloved by the tourists making selfies, were put on a barge moored at the bridge’s middle section:

The opposite side of the IJ, the Amsterdam-Noord district:

Next to the Ferris wheel was a funny attraction, a waterbike:

It’s just a normal bike mounted on two pontoons, with a rudder and a propeller attached to its front wheel. The propeller is driven from the rear wheel.

Any event must have a stage, of course:

The RTV Noord-Holland radio is broadcasting an interview with a police official live:

A few more photos from the event:

Some more amusing statistics from the event’s Wikipedia page: 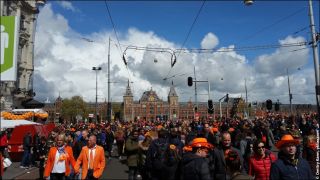