This year I’ve visited Ghent Light Festival, just as I promised a year ago.

The festival, which is held once every three years, proved to be immensely popular. Streets, hotels, restaurants of this small town could hardly cope with the horde of light-worshippers.

This festival was held for the third time, from Thursday January 29th until Sunday February 1st, in the Belgian town of Ghent (Dutch: Gent), which I’ve visited about a year ago.

There was no question as whether to go since it’s just a two-hour drive. We were lucky enough to book a room in the very central Hotel Gravensteen, which is just across the road from the Gravensteen Castle.

There’s no snow at all in the late January since the air temperature is around +2–5° C (36-41° F). Ghent is as magnificent as ever in the sunny weather.

Anyway, we’ve seen all that before. The main reason we’re here is the light show. It begins at dusk, around 6 P.M., and goes on until midnight. The display contains some fifty exhibits of various sizes and types, lined up along a five-kilometre route (PDF).

Let’s start off with the lightballs by Collectif Coin, scattered all around on the lawn. The balls are blinking to the music coming from an unidentified source:

I’m not even sure I can call that music, more of a rhythmical sequence of sounds. Here’s the video of what’s called Globoscope:

I also have another video from a different angle. The lightballs are controlled wirelessly, so it seems, since they weren’t there by day. The mere number of them is impressive.

More to follow. This greenish cobweb by THEM Sculptures is somehow referred to as Our House Ghent:

The soundtrack is very much similar to the previous one. Here’s a short overhead movie filmed at Mageleinstraat:

There were also more traditional things like interactive projections, tailored to a specific building. This one is Dancing House by the Austrian Klaus Obermaier:

A powerful beamer mounted some fifty metres away from the front makes the house tilt, rock and swing:

Unfortunately my camera battery has suddenly died right in the middle of the recording, when the display was still showing some 40% battery remaining. I figured out later that was caused by the cold, so if you give the battery some warm feeling, it’ll come back to life again, even with the same percentage.

The quay of the Leie with medieval houses:

As of 6 P.M. all the restaurants are packed with people, there’s a very little chance you’ll find a vacant table without prior reservation.

You may try to book a boat trip, but it’s again a challenge. It can probably take you hours of standing in line.

The houses seem to get a facelift for the festival.

But it may just have stayed since the Christmas.

Anyway, it all seems beautiful in the dark. I especially love the neon lighting on the ancient walls.

An unknown item next to the belfry. I’d call it “Snowmen interrogate a rat”:

It’s hard to believe these are typical Eastern-Flemish products though:

For me personally, Belgium is first and foremost beer. And, of course, chocolate and waffles.

The Cloud by Caitlind r.c. Brown and Wayne Garrett is made of six thousand (!) old incandescent bulbs. Some of them can be turned on and off with a pull-switch, which Belgian kids seem to be delighted about.

I have to admit it must have been a lot of work.

We move on. This projection by Claudia Reh called Echtzeitlicht is a bit under-interactive:

It uses a regular overhead projector (which I had at my university back in the day) and a film with a printed image on it. The innovation is apparently the water flowing over the film. Not impressed.

Yet another projection called The Sound of Light by Ocubo. This one is animated, but simply uses the façade as a screen, without any connection to the shape of the building. Not impressed either.

The most interesting is still to come.

A bit of meditation in the meantime: holographic rings and squares by Nonotak named Daydream V2:

This was pretty boring actually. Here’s the video (I can imagine what V1 was like):

More on the subject of meditation, the Horizontal Interference this post begins with. It’s made of purple threads stretched between two houses.

It looked interesting but a bit too static. If you walked up to it, you could see there were three rows of threads.

However walking up was no easy task. The exhibit was installed in the darkest yard of Ghent, which received just as many people as it could fit. You can imagine how easily one could walk inside this crowd.

But the worst crowded was the corner of Nieuwbrugkaai, where an item was mounted right in the middle of the Leie river. Mysticète by Top’La Design was a sophisticated fountain system with a picture projected on it. It was close to impossible to get to the front row, maybe only after a couple of hours. Nonetheless I’ve filmed a video of it by lifting my camera on the tripod above the wall of backs:

You can conclude from the video that the exhibit was overrated. It didn’t make sense there was that crowded there. Maybe the street was just too narrow.

A lighted aerial tower on the roof of a nearby building produced some mysterious smoke:

The Oude Beestenmarkt was under Huge Lighted Rabbits’ guard.

Stupid little people tried to make a photo on their backdrop, but only got silhouettes instead. Because those were Lighted.

These lighted poles are The Wood by Dex Voil. They’re supposed to depict “the fragile balance between city, nature and technology”. People (mostly kids) wandering in the Wood influenced its light and colour.

The minimalistic Drawn in light by the Dutch Ralf Westerhof rotates slowly in the floodlight:

And we’ve come to the most exciting things! Here’s my Top-3.

An amazing, quality animated projection Horta by Théoriz, depicting famous inhabitants of Ghent on the façade of Bisschopshuis:

The Large Pendulum Wave creates an illusion of circular or spiral movement, which is pretty mesmerising (my camera’s battery has died on this one again):

This was a clear winner, which is suggested by its #1 in the program. It’s a monumental block sized interactive projection mounted on the Sint-Pietersplein square and covering three buildings, created by a group with a weird name Dirty Monitor:

Seeing is believing, so:

A building turned into a game by students of the University of Ghent:

One had to hit a platform before the building with a hammer. If the blow was strong enough, the building got entirely lit, after which it rotated.

I liked both the idea and the implementation, here’s a video of the action.

That’s about all I managed to photograph. I’ve skipped some things I didn’t find interesting. The organisation was absolutely great, and the festival was free for everyone, I was only a bit shocked about its popularity.

You can see all videos of the festival on the event page. ■ 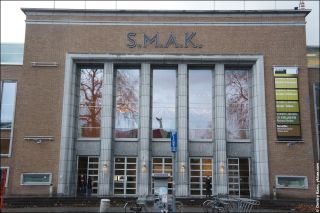