But our Houten seems to be in the lead here.

An active growth of Houten municipality began in 1970’s. Back then it was just a little village with about four thousand inhabitants. It is around that time that a strategic plan, whose objective was to stimulate the residents to use bikes while discouraging them from driving, has been developed. This was also the time when the butterfly-shaped by-pass road (the Rondweg) was built—I mentioned it along with the district breakdown in my last post.

One of the strategic provision stipulated that with a car one district from another can only be reached using the by-pass road, and there would be no drive-through route. Cyclists don’t face this restriction, therefore biking to friends’ is often faster than driving.

Bike paths always have this reddish surface to remind pedestrians and motorists they need to keep off them.

Another peculiar element of the strategy was a ban on straight road stretches longer than 70 metres (!) in the residential area. In the beginning I was a bit shocked at this cobweb of roads-paths-bends-turns, complemented by dozens of small bridges over canals:

The efforts made paid off: in 2008 Houten was declared the “Bike town” of the year (Fietsstad 2008; jury report in PDF).

It’s indeed remarkable that there are almost no bike cross-roads with traffic-lights. At the crossings the bike paths almost everywhere go via a tunnel (in fact, if the bikes really had priority the cars should have been going via a tunnel):

The only bike traffic-light I know is just outside the by-pass road.

The small light below is supplemented with a round wait gauge and repeating the signals of the main, upper one. To request the green light you have to touch a special button.

A very convenient feature of Dutch bike traffic-lights is automatic activation at approaching bikes by a sensor fitted under the road surface. The same principle is also used for cars.

The town has an extensive network of “bike streets” (fietsstraat). This sign is reminding drivers that cars are “guests” here. Which means they’re allowed but should be polite and respectful to cyclists:

This sign denotes a detour route in the case of a closed road:

Someone did apparently feel offended by the blatant address and concealed a few letters turning the informal “you”, jou, into the decent u.

In some places—in new districts mainly—bike paths are in fact bike avenues:

But the old Houten is greener:

And these spherical bumps are common on bike crossings:

This bike bridge is a bit of overkill really. It’s bent to demonstrate how advanced the technologies nowadays are:

This warning sign says that an improperly parked bike will be removed:

To minimise the risk, you may prefer to make use of a Transferium. The bike parking in the Houten train station I showed you in my last post:

The blue-and-yellow bikes above, OV-fiets, are for rent.

This is the Transferium in the other station, Houten Castellum:

It has another level upstairs and special steps for rolling the bikes up:

However, since our town is pretty small, it’s not that busy on all these bike roads.

Next: Part 3. Water and Fruits 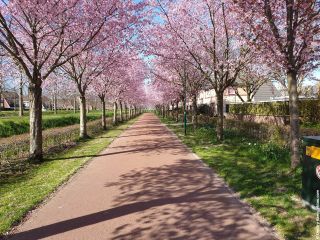