From Friday the 19th until Sunday the 21st August 2011 a traditional Latin-American musical festival Dias Latinos (“Latin Days”) was held in Amersfoort.

It’s a popular event featuring a lot of musicians from different countries. There’s absolutely no chance to catch up with all what’s on: so, this year 70 performances were planned at seven stages all over downtown Amersfoort. Stages with lots of equipment were installed in the city center, which was prohibited to enter by any transport, including bikes. Police was patrolling and directing people masses, so dense at times that it caused “traffic jams”—thanks to excellent weather, at last.

On Havik a stage was installed right above the canal:

Two beams are laid on sand bags, the stage is mounted on top of them:

People don’t mind sitting wherever they deem possible, as usual. On bridges:

On Friday I had to work like most of people, so they had to miss me at the festival. So I caught up on Saturday.

As one can not be everywhere at once, I had to make a choice. I was fortunate to stumble upon a brilliant band Tomasa Quartet. They play something that can be described as instrumental latinjazz. That day they were performing at a small stage located at a cross-roads.

The quartet mainly plays quite sophisticated kind of music and consists of four members. All four are true virtuosos, and live in Amsterdam.

The frontwoman who plays violin is Claudia Valenzuela. She is 31, half-Colombian and half-Chilean, grown up in France, plays violin since she was six, lives in the Netherlands since she was 18. Always performs with a serious look. A rare picture: Claudia smiling:

Pianist Claudia Cassier. Second Claudia is 37, she comes from Germany, also plays piano since she was six, in the Netherlands since she was 26.

Bass is played by Mathias Breton. He’s French, plays since the age of 17, his instruments are contrabass and bass guitar. Lively and social. You can see how he enjoys it when he’s performing.

The percussionist’s name is Elvin Marchena, and he’s from Curaçao. Unfortunately, I didn’t have a chance to talk to him.

It’s noteworthy that in a band consisting of people from different parts of the world (the fact I’m already used to) happened to be two Claudias; I asked myself how they manage to distinguish the two when calling by name.

And, by the way, everyone gets surprised when I tell then where I come from. From all Russian cities most of the people only know Moscow, the most advanced of them may also remember Saint Petersburg. What Tyumen is and where it is is always a question to be answered with improvised means.

Sunch events give you a great opportunity to speak to musicians informally. The violinist Claudia spotted my long fingernails directly and guessed right that I played guitar. Involuntarily I reflected what non-musician people think about them…

I made a footage of some interesting items (it’s worth watching; there’s also a procession in crazy bright clothes in the video):

While the quartet were playing, a huge audience assembled around; I was lucky enough to have got a seat in the front row on one of a few chairs set out for the spectators, which allowed me to make the footage. Most people stood or sat down right on the ground. Twilight fell.

Cheerful The Jazz & Mexican Spirit were rounding their performance off on Havik:

As Sunday came desperate guys called Desperados from the Soest village I once lived in performed at a very good level.

Here are some videos—the music is pretty simple yet lively:

An elderly couple from Aruba amused the audience, dancing:

Latineo is a latinjazz quartet from Rotterdam. It was a recommendation of Claudia Valenzuela from Tomasa Quartet. As it happened at the same stage at the Havik street, photos and videos are shot from not the best point—the best spot would have been on the canal, of course:

Good news is that this time I had a tripod with me.

Spectators sat wherever they could, like yesterday. On the bridge I spotted violinist Claudia (on the right hand side, holding a bottle):

Whatever happened, boat trips went on during the concerts:

The festival was a success, the good weather played its role, too. ■ 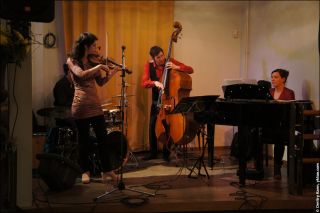 The Aristocrats at De Boerderij 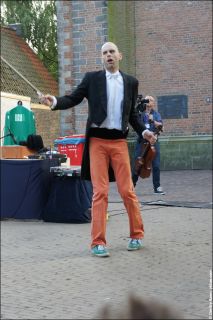