On our last day, (morning, to be precise), we decided to visit St. Stephen’s Basilica (Szent István-bazilika), a famous Roman Catholic cathedral.

On our way to the cathedral I spotted an interesting mechanism at a building yard:

A constructor tried to explain me in signs that I wasn’t allowed to photograph there, but I pretended to not understand Magyar signs.

St. Stephen’s Basilica is situated on the square of the same name in Pest (Szent István tér):

Ego sum via veritas et vita (I wouldn’t challenge that):

Entrance to the Basilica is free. So is exit. The cathedral’s interiors are splendid:

I payed attention to a more contemporary piece located near the exit:

The composition is named “Mindszenty is crucified on the crosses of the 20th century”. It depicts Hungarian cardinal Jozsef Mindszenty (1892-1975), who suffered from both fascists and communists. That’s why he is crucified on a swastika combined with a hammer-and-sickle symbol.

That’s it. We’re done and going to the station.

In the line for tickets we discovered we weren’t in Holland: if you stand keeping a decent distance from the buying person, everyone thinks you’re not in the line. You should really stick to them, like in Russia, for the people to see you’re in the game.

My fellow was sure ticket price would be the same as before. I wasn’t because I saw how life in Hungary was different from one in Austria. And I was right: tickets can cost either € 13 (they were sold out) or € 25. On our way here we payed € 35—for the same train and route. Only the epoch is different.

In three hours we’re again in Vienna. There’s a direct bus line from Wien Meidling station to the airport. Ticket price is € 7.50:

That’s all, folks! Thanks for your attention, I hope you enjoyed it. ■ 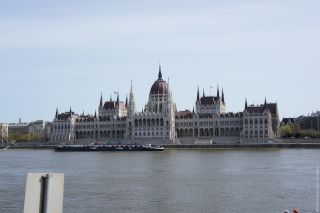 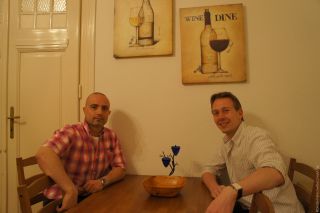 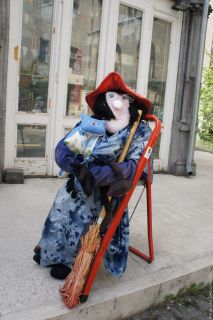