We proceed in the direction of St. Stephen’s Cathedral. Restless Austrians demand freedom of religion (as though they lack for it):

Nonetheless, I decided to join and started a sitting action for upholding human rights in Austria!

I reckon the Opera one of the most beautiful buildings in Vienna:

There’s a known place with a high concentration of museums. The area is called Museumsquartier; Volkstheater is also nearby:

A little known great curiosity of the city is the Vienna’s smallest house (Breite Gasse 20; built in 1872). It’s tiny even for Amsterdam’s standards: being only a couple of meters wide it forces its residents to be fit:

Another house, this time somewhat bigger and called Hundertwasserhaus (Kegelgasse 36-38) is an apartment house and a famous expressionist landmark designed by Hundertwasser and Krawina:

Hundertwasser considered the house as one of his best creatures. He is said to have rejected the fee for the project because he was happy there was nothing ugly built instead.

Vienneses have a huge amusement park called Prater (derives from Latin pratum meaning meadow). Hauptallee, which is 4.3 km long, is a popular jogging track. You can rotate the globe here:

The Planetarium is not so popular, judging by the absence of visitors around:

There are pocket Ferris wheels:

And this is how entertainment looked like before this park was established:

But times have changed, and now it looks differently:

But we’re moving on. 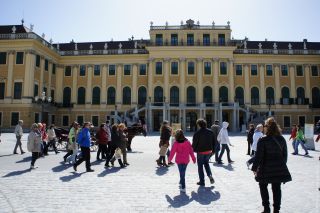 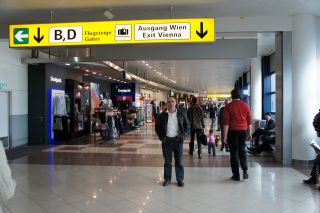